We are excited to present the 8th place winner of the Becoming Writer Anniversary Contest. Thomas Heaven Ph. D. is a retired Psychologist, Physician Assistant, and United States Air Force Captain. You can follow his work at www.mancreatedall.com 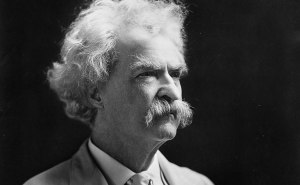 While Josh waited in line, he focused on counting the books on the shelves. He was then able to slow the shaking in his hands. His palms were sweating as well and he was concerned that he might drop his copy of The Adventures of Tom Sawyer before his favorite author was able to sign it.

His jaw had dropped when he had seen the notice in the school paper. Samuel Clemens was going to be at the book store today to sign copies of his books.

Suddenly, he realized he was next in line.

As Josh approached, he noted the bushy mane and the equally luxuriant eyebrows and mustache. The intensity in the man’s eyes appeared as if he could see into your soul. There was no doubt in his mind that this was actually Samuel Clemens.

“Come closer boy.” Mark Twain said in a soft but gravelly voice. “I see you want to be a writer”

Wanting to ask how he could know what his life long dream was, Josh instead replied, “Yessir, but I don’t think I will ever be good enough. I practice writing every day but I am never satisfied by the result of my efforts.

“Fiddle Faddle,” don’t you know that every great writer fretted a whole heap before they ever got around to pennin’ their first novel. Why I even thought about givin’ up long before I wrote that book you got there in your hand.”

Josh couldn’t believe what he was hearing. The great Samuel Clemens was disappointed with his first efforts too.

“What sort of writing instrument do you use?”

The renowned author leaned over and took an object from a satchel by his desk. It was a wooden shaft with a golden tip. He handed it to Josh. “This here’s what’s called a ‘dippin’ pen. You dip it in an inkwell and it’ll write better than one of them ball point pens you use.”

“Nonsense.. do you want pancakes or waffles for breakfast?”

“Do you want pancakes or waffles?” his mother yelled from downstairs.

He got out of bed, got dressed and went downstairs.

His mother was in front of the stove flipping pancakes. Josh loved to tease his mom so he leaned over her shoulder and said “Awww, I wanted waffles.”

“Well you should have answered me when I asked.”

His sister Josie chuckled. She was already at the table eating. As far as brothers and sisters go, these two got along well together. They shared the same sense of humor and both loved to tease their mother. They had lost their dad in Afghanistan two years ago and the kids spent a lot of time with mom. They had formed a very close bond while they had grieved.

After breakfast, Josh returned to his bedroom to try and write again. As he pulled his chair up, his eyes got big and he felt the blood drain from his face. There, on his desk, was a bottle of ink and Samuel Clemens’ dipping pen.

Three possible, rational, explanations formed a line in his brain.

Having ruled out everything that was reasonable, he decided to go with the “You don’t look a gift horse in the mouth” philosophy. In one motion, he picked up the strange writing instrument and put his ball point pen in the desk drawer.

Josh dipped the pen into the ink. Just the right amount clung to the tip. He put the golden nib on the paper and immediately words began to appear on the page. The pen seemed to move on its own. The only thing he had to do was dip it in the ink whenever the words started to pale.

After a few moments of this, he put the pen down on the desk and looked at what he… no, what the pen had written. He could not believe his eyes. The writing could not have been more perfect.

He realized that he could see the protagonist in his mind, just by the description on the paper. Each scene jumped to life as he read. There wasn’t a single flaw in the spelling or grammar and the punctuation was perfect.

When he finished reading what had been written, he craved more. He dipped the pen and let it run across the page once more. He continued holding it and refilling it over and over, only taking brief breaks for lunch and dinner. When his mother yelled “Bedtime” up the stairs, he yelled back, “In just a bit, Mom.” Before he realized, the sun was coming up outside his window. Although he knew he could write much more, he also knew he needed some sleep. He got up, stretched, yawned, and collapsed on his bed.

After a few hours of sweet, restful dream-less slumber, Josh woke up. He stood up and went to his desk.

“Oh No!” Mark Twain’s pen was gone. In its place was his old ball point pen.

He rubbed his eyes and looked again. Not only was the pen that he had written so well with gone, but he saw that the writing on the pages had been done in ball point ink. The words were the same as he remembered from last night. A really good story written to perfection.

Suddenly it dawned on him. He had never found Mark Twain’s pen. He had found his voice.