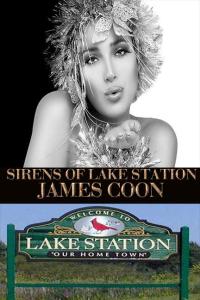 From the upcoming anthology: Musings From A Demented Mind by Derek Ailes & James Coon

“Thank you for an enjoyable evening.”

“My name is Jake,” I answered as both of us were standing in my hotel room.

“Mine is Vicki,” she said as she put her grey t-shirt with the word PINK written across it back on. “Are you sure you can’t stay longer?”

“No, I’ve got a sales meeting in South Bend in a few hours. I guess this is goodbye.”

She looked at me sadly as she brushed her straight, black hair with a pink hairbrush. With a sinister laugh, she said, “We’ll be meeting a lot sooner than you can possibly believe.”
She walked over to me and gave me a kiss on my left cheek. My heart was telling me to stay, but I knew I had to be at the sales meeting. If I didn’t land the deal, I was going to be fired. My boss promised me that. She continued laughing sinisterly as she walked out the door.

As the closing door echoed through the room, I said, “That is what I get for picking up a hitchhiker.”
I headed for the bathroom to take a shower and shave. After a twenty minute shower, I headed back into the bedroom to change into my grey business suit. I opened up my briefcase and checked to see if I remembered to put my new business cards in. I walked over to the window and saw the hood of my midnight blue Dodge Neon sticking straight up. I grabbed my briefcase and ran out of the room and over to my car. Being someone who knows nothing about mechanics, I did not know if somebody had tampered with it. I closed the hood and checked to make sure nobody slashed my tires. Satisfied nothing appeared to be wrong, I got into the car and felt a sigh of relief as the car started right up.

I drove out of the parking lot and headed for the exit leading to the interstate. Five minutes down the road, I began to hear a sound coming from under the hood like metal grinding on metal. The check engine light came on. I cursed and turned right at the next intersection. I could see a sign up ahead that said: Welcome to Lake Station. To the left of the sign was a gas station with a repair shop. I pulled into the parking lot just as the car stalled. I turned the key and it wouldn’t start. I got out of the car as a mechanic walked over to me.

“Someone has been playing with my engine.”

I popped open the hood and the mechanic did an inspection. “Someone did a beautiful job on your engine, mister,” he said sarcastically.

“Can it be fixed in two hours?”

“I’ll be lucky to have it done today.”

“Damn, I’ve got to be in South Bend in a few hours. Can I use your phone?”

“Our cellphone service isn’t working at the moment. Something’s blocking the signal. Probably one of those solar flares I keep hearing about on the news. You can check the Walgreens across the street. They have a landline. I’ll get to work on your car right away.”

I walked over to Walgreens and walked in. I didn’t see any sales clerks at the front counter so I headed toward the pharmacy in the back. I walked past the magazine aisle when I heard a loud alarm going off from outside. It sounded similar to the sirens I hear going off constantly during severe thunderstorms. When I walked into the store, there wasn’t a cloud in the sky. As I was heading back to the front door to see what was going on, somebody grabbed my arm.

“If you go outside, you will die.”

The badge on his uniform stated he was the store manager.

“What are you talking about?”

“They’re going to get you?”

“They bestow the kiss of death.”

He grabbed my arm and forced me through the swinging doors leading to the backroom.

“What the hell is going on?” I asked angrily.

“In the middle of Main Street is a gateway leading to death.”

“Death?” I asked giving him a suspicious look.

“They sing to put you in a trance. Once they have you in their power, they will kiss you and drain the life force completely from your body.”

“What the hell are you talking about? This is complete nonsense.” By this point, I was getting annoyed by his paranoia.

“On Main Street there is a hidden gateway mankind can’t see. It is where they come from.”

All of a sudden, I heard a faint singing voice from the distance.

“They come through the gateway so they can claim victims to satisfy their lust,” he continued.

“This is the real world. Mythical creatures don’t exist,” I argued.

“You don’t know about the history of Lake Station. They’ve demanded a human sacrifice for one of them each year for centuries. Today is the day.”

“You’ve got to be kidding me! Are the people in this town so primitive they would let human life go like cattle?”

“We have to. Their singing makes us.”

Our conversation was interrupted by someone screaming, “Help!”

The singing was getting louder as if it was coming directly from outside the swinging metal doors.

“Jack, Jeff is acting funny! He’s under the sirens’ spell!”

The store manager rushed out the back room and ran to Jeff who was standing with a blank expression on his face as he was being beckoned by the song of the sirens. He grabbed Jeff’s shoulders and shook him violently. “Why didn’t you have sex last night?”

“I…couldn’t…find…my…wife…last…night,” Jeff slowly said as he was still under the spell.

Jeff’s body became stiff and it rose several feet off of the floor. The store manager grabbed onto his legs and held onto him tightly.

“Let me go! I have to have her! She belongs to me and I belong to her! My dream! My Love! My Life!” Jeff screamed.

“Mister, please help me,” the store manager pleaded as I rushed over to them.

I grabbed onto Jeff’s arm and held it tightly. The singing was getting louder as if it was coming closer and closer. Jeff jerked violently forward causing both the store manager and me to fall backward from the force. Jeff slowly landed on the floor. A few seconds later a tall, beautiful woman with silver hair and glowing red eyes appeared. Her skin was silver and she was wearing a silver dress that was a shade darker than her skin. Her hair stood straight up like it was full of a strong electrical charge. She slowly walked over to Jeff and put her right hand seductively on his chest. She was singing while her mouth moved seductively with every word. She cocked her head to the side and raised her hands. Jeff’s body rose several feet in the air and then she floated upward until her head was aligned with his.

“You’re all mine. My love. My Life,” Jeff chanted repeatedly.

She began to kiss his lips. As she continued to kiss him, his body caved in as she sucked his insides out through his mouth. As his whole body became flat as a sheet of plywood, he fell to the ground. The siren stared at us for a few seconds and walked away.

I couldn’t move at all being frozen in fear.

“Is everybody ok?” the store manager asked a few seconds later. He kneeled down over what was left of Jeff and prayed. He looked up toward me.

“For the rest of my life, I will never forget what I witnessed here.” I said.

“I’ve witnessed this happen several times in my lifetime.”

“Why don’t you people move? Just pack up and leave?”

“I don’t know. It has never occurred to me to leave. Why?” he asked confused.

“You people are crazy! Why was he so attracted to her, but not the rest of us?”

“They only claim men who will give in to their sexual advances. I wasn’t affected because my wife and I had sex last night. You have to have sex the night before or they will be able to claim you. Did you have sex last night?”

“I picked up a female hitchhiker last night. She spent the night with me at my hotel.”

I looked at him confused. I asked him again why the people of the town didn’t leave.

“I’m not sure. I just have this desire to stay here for the rest of my life.”

I looked down at what was left of Jeff and decided it was time to get out of Lake Station for good. I walked away from him. As I walked around the corner, someone grabbed my arm. I turned around and Vicki was standing before me.

“I told you we’d be seeing each other again,” she said seductively.

“It was you. You were the one who tampered with my car.” I looked at her angrily.

She rubbed her right hand across my chest and laughed playfully. “Now what would a small town girl like me know about cars? Why don’t you come over to my place and I will show you pleasures unlike anything you’ve ever experienced before?”

I pushed her away and ran out the front door. I stopped dead in my tracks in fear as one of the sirens was standing before me surrounded by twenty other women. They all had seductive smiles on their faces. Vicki walked out the door and over to me. She stood next to me and held my right hand.

“Please, Jake,” she said seductively. “Don’t worry, she’s not going to hurt you.”

“What’s going on?” I looked at the siren and then back at her.

“She knows I want you. I got tired of Jeff as my husband so I went looking for a new one last night and found you. I called out to the siren and she came to take Jeff away as a sacrifice. We must sacrifice a husband to a siren once every hundred years to receive eternal youth. A small price for immortality.”

The siren raised her right hand slowly and rested it on my left shoulder and I suddenly felt no desire to leave. I wanted to stay in Lake Station for the rest of my life. I looked at Vicki. My beautiful Vicki. My dream. My love. My life.