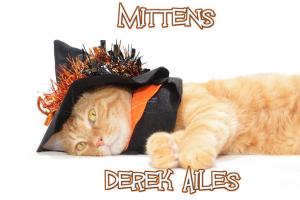 “Mittens!” Tammy Kellington shouted from the living room.
Mittens, Tammy’s orange tabby cat, stopped chasing the small blue bouncing ball in the kitchen and ran into the living room where Tammy was hanging the last of the Halloween decorations for the night’s trick-or-treaters.
“I think everything is ready. Do you want to see my invention in action? Of course, you do.” Tammy said as Mittens watched her elderly master slowly walk over to the large candy bowl filled with small candy bars. She pressed a button on the table the bowl was attached to, and the top of the table slid forward through the front door’s opened window and stopped on the other side a few feet in front of the door. She pressed the button again and the bowl retreated back through the window stopping where it had originally been.
Tammy looked at Mittens with a big smile on her face. “There’s a sensor on the other side of the door. When somebody approaches it, the bowl launches from its post in here and slides out to the one outside. When the children grab their candy and walk away, it will automatically return. All I have to do is make sure the candy doesn’t run out.”
Tammy, now in her late sixties, once worked for a company that invented new products and sold them on television. The company had started getting contracts with major retailers around the time she had retired. She had invented a lot of products for the company and had been receiving royalty checks for her inventions ever since she retired ten years prior. Her husband had died from cancer three years prior and Mittens was the only family she had. Her husband and she never had any children.
Mittens jumped onto the table and pressed the button and watched as the bowl launched forward. Once the bowl was on the other side, Mittens hit the button again.
“I don’t know how I ended up with the smartest cat alive, but I’m glad I did,” she said and gave Mittens a hug.
Mittens looked at her suspiciously. Tammy’s heart sounded like it was beating faster than normal and Mittens knew something wasn’t right.
“I think I need to sit down. I don’t feel too well all of a sudden.”
As Tammy was walking toward her chair, she grabbed her chest and collapsed. Mittens ran over to her and grabbed the necklace from around Tammy’s neck and pressed the red button in the middle of it.
A few seconds later Mittens heard a female voice coming from the speaker on the necklace. “This is Angie from Life Alert.”
“Meow!”
“Is this Mrs. Kellington?”
“Meow!”
“An ambulance is on its way.”
Mittens stared at her master for several minutes before running over to the couch and jumping on top to watch for the ambulance, turning her head every few seconds to check on her master. She was worried the ambulance wouldn’t arrive in time to save her. When the ambulance arrived several minutes later, she watched as the EMTs rushed into the house and attended to Tammy. She heard one of them say that Tammy had a weak pulse. The EMTs took her out of the house on a stretcher.
As the ambulance pulled away, Mittens watched the street begin to fill up with trick-or-treaters and their parents. As the children walked up to the front porch and the bowl of candy slid out the window and back continuously, Mittens pulled the large bag of candy over to the table with her mouth and then used the strength of her head to stand the bag upward behind the bowl. She then pushed it forward, spilling its contents into the bowl.
As the last of the stragglers, mostly teenagers, stopped by and grabbed the last of the candy, Mittens sat down by the front door and waited for her master’s return.
Several days went by and nothing. She sat by the front door for several more days and still nothing. She stared at her blue rubber ball with no desire to play with it. Until her master came back home, she would not do anything remotely resembling fun.
Weeks went by and still nothing. Fearing she would never see her master again, she decided to move away from the front door and get some much needed exercise. She tried to stand up, but didn’t have any strength left. She felt very weak, like she was completely drained of energy. As she slowly struggled to walk toward the kitchen, her eyes became too heavy to stay open. Her eyes closed and she collapsed on the floor.
Mittens cried out one last meow before slipping into complete darkness.

“Mittens,” she heard Tammy whisper.
Mittens slowly opened her eyes and looked up at her master.
“Yes, it’s me. I was in the hospital for over a month. I’m glad I keep plenty of these in my cabinet,” Tammy said, pointing to a pack of AA batteries. “Sadly, your memory program only lasts several days after the batteries wear out. I’m going to have to teach you everything all over again.” Tammy held a blue ball up to Mittens. “This is your favorite blue rubber ball.”
Mittens meowed excitedly, happy that she had a new toy to play with.