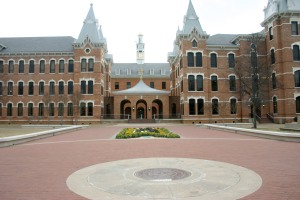 “What did you think of that last one?” the father said to his son.

“I can’t believe he’s still here. When I was a sophomore we used to have this rhyme for him.”

“I liked the video clip he used.”

“Lester, Lester the grade point molester. The man who gave Jesus a C.”

“Yeah, I learned a lot in his class. Where do you want to go next? We’ve done the Religion department and the biology wing. Was there anything you wanted to see?”

“Is it weird? Seeing all these professors?” the father asked his son.

“It’s a little weird that some of them taught you and they’re still here.”

“Yeah. They were a lot younger when I was here.”

“It’s cool some of them are your age and stuff.”

“Perkins and I used to go down to the SUB – that’s the student union.”

“On Thursdays for lunch. His game was to try and get a date with the first girt that walked through the door. Didn’t matter what she looked like.”

“I can’t believe he’s the head of the Biology department. He was always terrible in biology. Loved physics. Terrible in bio,” the father said to his son.

“Yeah. So. What do you think? Do you think you might want to go here?”

“Your mom and I loved it here.”

“I know that girl is going to-”

“Meredith, dad. Her name is Meredith.”

“We’ve been together for three months, dad.”

“Well, I know Meredith is going to Louisiana College.”

“You know, your mom and I wouldn’t be mad if you decided to go there.”

“Seriously. You can go wherever you want.”

“Can we go and see your and mom’s apartment?” the son asked his father.

“That place was a dump.”

“Yeah. I just thought it would be cool to see it.”

“Have you thought about what you want to study?”

“I figure I can finish here in four years and then go to med school in Houston, like you and mom.”

“Maybe that life isn’t for you.”

“I know my grades aren’t the best. But I’ll work really hard.”

“And Miss Lapret has been really unfair. There’s no way I should have a C. I turned in that report. She lost it. I shouldn’t be punished because-”

“I’m going to bring my math grade up, dad. The C is just because we haven’t finished our midterms yet. We don’t have enough grades in the system and she’s bases our score on the total points possible for the year. It’s weird. But I kind of like it because I can see what I need to get. But, anyway. I’ll work really hard.”

“Are you hungry?” the father asked his son.

“There used to be this place. I think it was a few blocks. That way? They had the best burgers.”

“Let’s go get a burger. I use to try and take your mom there, but she never really appreciated it. She said it was too greasy.”

Jeff is a writer living in Baltimore with his wife and five kids. He is the author of four books, including Mencken and the Monsters. He regularly blogs at Vagrant Misunderstandings.