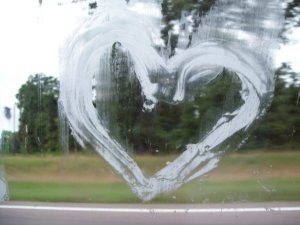 The blue Malibu coasted down 67 carelessly, weaving in and out of traffic and proudly parading the white chalk on its back: Just Married, Mr. and Mrs. Jonathan Weber. The driver, an adventurous blonde, smiled stupidly at no one in particular, seemingly in a phase of euphoria. As she drove down the freeway, love songs dripped like a sweet molasses from the car’s stereo system, calming and soothing her soul. She momentarily closed her eyes and exhaled slowly, recalling the events of the previous night.

She and John had only been together a few times in the past four months, but nothing had prepared her for last night. Sure, it had been the first time since the wedding, but she had had him before and he was nothing like this. Last night, as his tongue lapped up the sweet white chocolate from her torso, he swore himself to her; that they’d always be together, that nothing would come between him or stop his love for her. And she melted at his words just as the chocolate melted in her mouth. Laying there in the dark, he traced an infinity symbol over her heart and whispered into her ear, “John and Heather forever.”

Heather opened her eyes only to see the reflection of red and blue flashing lights in her rear-view mirror.

She slowed her speed hoping that the officer would move around her to plague some other motorist; instead, he stayed right on her tail. She eyed the left lane, but it was occupied by a green Dodge Dakota. She bit her upper lip to stop the curses that were romping in her head from rolling out of her mouth. Despite the urge to stomp the accelerator into the floor, she pulled to the right side of the road and waited for judgment. She stared down the road that shot into her eternity and watched it slowly slip away.

“Do you know why I stopped you today, ma’am?” the officer asked through her cracked window.

“No, officer. Is there a problem?” Heather asked lowering the window the rest of the way.

“You were driving somewhat recklessly back there. Have you been drinking?”

“No, sir. I’ll take a Breathalyzer if you’d like. I’m just…just in a hurry. You see, my car’s been acting up, so I’m on the way to a shop right now to get it fixed.”

“I see. Can I get your license and registration, ma’am?”

She sighed loudly as she leaned across the console to gather the documents from her purse and the glove-box. Her face felt warm; she suspected it must be glowing red and she felt the burning tears swelling up behind her eyes as she handed the officer the registration made out to Mrs. Diana Weber and her identification: Mrs. Heather Golding.

Kayla I. Shown-Dean is the author of Muted and an avid reader, blogger, and poet. To read more of her work, visit her website at www.kideanaround.com or email her at kideanaround@gmail.com.